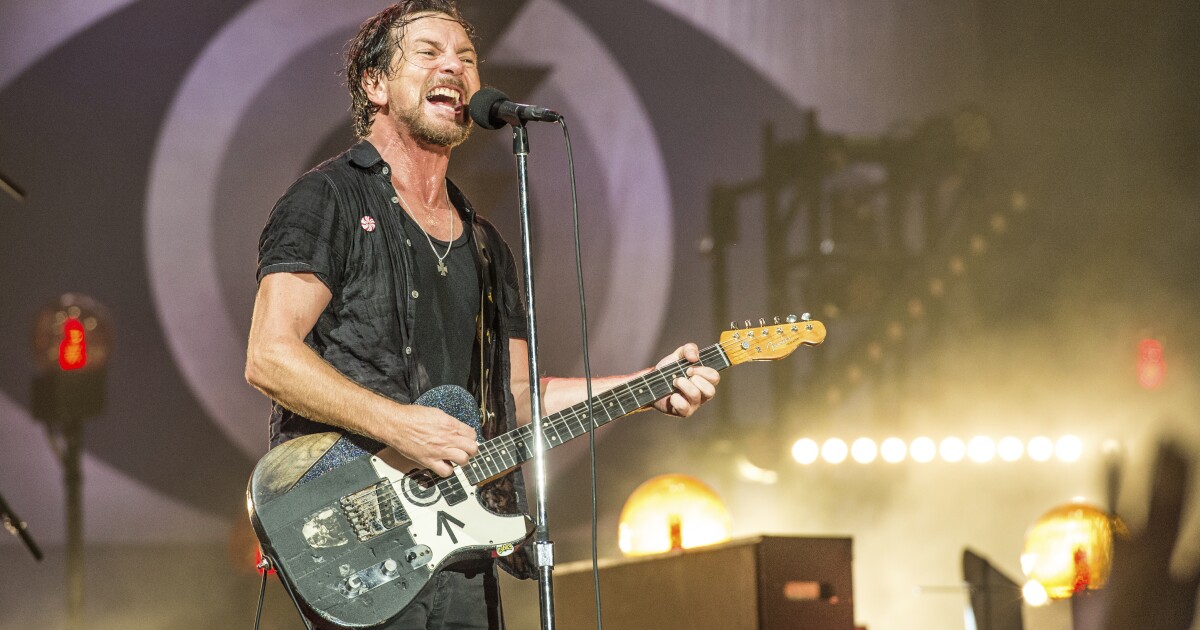 Hello and welcome to the UT Arts & Culture newsletter.

I am David L. Coddon, and here’s your guide to all the essentials in San Diego arts and culture this week.

But I hope not. Relegation of pearl jam to the deed of inheritance implies that these guys are past their prime. They are not. If you have a ticket for the band’s concert on Tuesday night at Viejas Arena, the kickoff of a North American tour, you’ll hear it for yourself.

Yes, Eddie Vedder and his company (guitarists Mike McCready and Stone Gossard, bassist Jeff Ament and Pearl Jam drummer Matt Cameron since 1998) have been making music together for decades. No, they don’t sell albums like they used to. In the age of streaming, few do. But Pearl Jam in concert always cooks.

Tuesday’s show is a makeover for an April 2020 date that was postponed by the pandemic. It’s also the band’s first performance in town since 2013.

Most of us know that Vedder lived in Encinitas when he was growing up and attending San Dieguito High School. This and his other connections in San Diego are well known. Perhaps least remembered is that one of the 72 official bootleg albums the band released in 2000-2011 was a recording of a Pearl Jam show at the then-named San Diego Sports Arena. (Were you there?) There’s also a YouTube recording circulating the web, albeit in poor quality, of a Pearl Jam performance at the downtown Civic Theater in November 1993.

Then there’s that legendary 1991 concert at the Del Mar Fairgrounds with Nirvana, Pearl Jam and the Red Hot Chili Peppers on the same bill. Everyone says they were at that show. Don’t believe them.

If you haven’t figured it out yet, I’m a fan. Not a fanatic, however. I just think it’s my duty to remind you that Pearl Jam is not a “what happened to them?” bandaged. See you on Tuesday.

Speaking to me in February about his latest album “Rare Bird”, singer-songwriter Sarah Petite asserted that “It really all has to do with love.” Recently, the folks at the San Diego Music Awards adored Sara Petite, honoring “Rare Bird” as album of the year in addition to two other accolades she received. Kudos to Sarah!

Scream for her yourself on Saturday when she performs as part of the 2022 Adams Avenue Unplugged event in normal heights.

She’s America’s favorite intentional luddite. Well, maybe not America’s, but mine for sure: Francois Lebowitz. The star of the recent Netflix series “Pretend It’s A City” will be at the Downtown Balboa Theater Monday night. Union-Tribune Editorial and Opinion Director Matthew Hall will moderate the conversation with Lebowitz.

Besides being wary of digital technology, to put it mildly, Lebowitz is outspoken about almost everything social, political, cultural and even mundane. That’s what makes his audition so unpredictable. As the oft-quoted Lebowitz once said, “Not all of God’s children are beautiful. Most of God’s children, in fact, are barely presentable.

Little Italy becomes much more crowded this weekend when the Mission Fed ArtWalk returns to its streets. As anyone who has attended ArtWalked in the past knows, the art itself is only part of the attraction of this event, which also includes plentiful food, live entertainment and some of the best shows you’ll do all year.

The event takes place on Saturday and Sunday, and it’s free. Do yourself a favor and take the streetcar to Little Italy, considering parking and especially the cost of gas these days. With the money you save, you can buy art.

READ MORE: Mission Fed ArtWalk finally returns to Little Italy this weekend. What do you want to know

“American Postcard Town,” a world premiere musical from Lynne Shankel and Crystal Skillman, opens tomorrow on the Don Powell Theater Stage at San Diego State. It is a production of the SDSU School of Drama, Television and Film directed by Stephen Brotebeck.

SDSU students star in this thoughtful musical about discrimination and activism. He had his first industry presentation in New York in January. Big Apple-based orchestrator/music arranger Shankel has an impressive list of credits at the Old Globe Theater in San Diego, including “Allegiance” (2012) and “Life After” (2019).

Tickets for the SDSU production, which runs through May 5, cost between $17 and $20.

“”Script on screen”: on the red carpet”: UC Santa Barbara’s “Script to Screen” refocuses our attention from this year’s memorable Academy Awards to the movies and the filmmakers themselves. Host Matt Ryan was invited to the red carpet at the Santa Barbara Film Festival to interview actors, writers and directors from many films nominated for the 2022 Oscars this year. Watch him talk with actors like Benedict Cumberbatch, Troy Kotsur, Javier Bardem, Maggie Gyllenhaal, Penelope Cruz and yes, Will Smith. He also goes behind the scenes with the writers of “King Richard”, “Dune”, “Belfast”, “The Lost Daughter”, “CODA”… and more.

“An Evening with David Brooks”: David Brooks is a columnist for The New York Times and a commentator on “The PBS Newshour,” NPR’s “All Things Considered,” and NBC’s “Meet the Press.” His books include “Bobos in Paradise”, “The Social Animal” and “The Road to Character”. His latest book, “The Second Mountain: The Quest for a Moral Life,” is a New York Times #1 bestseller. As part of the annual Writers’ Symposium by the Sea, Point Loma Nazarene University Journalism Program Director Dean Nelson has a candid, humorous and inspirational conversation with Brooks about his work as a journalist and writer , how events in his life have shaped who he is today and his spiritual journey.

“2021 Kyoto Prize Winners”: Three UC San Diego professors sit down with three Kyoto Prize winners for fascinating one-on-one discussions about their work. Laureate Andrew Chi-Chih Yao has created new trends in computing and his work continues to influence current real-world issues in security, secure computing and big data processing. Robert Roeder revealed the principle of the mechanism of transcription regulation in eukaryotes during his more than 50 years of research on transcription. And Bruno Latour revolutionized the conventional view of science by treating nature, humans, laboratory equipment and other entities as equal actors, and by describing technoscience as the hybrid network of these actors.

And finally: the best events of the weekend

Here are the main events taking place in San Diego from Thursday, April 28 through Sunday, May 1.

Coddon is a freelance writer.