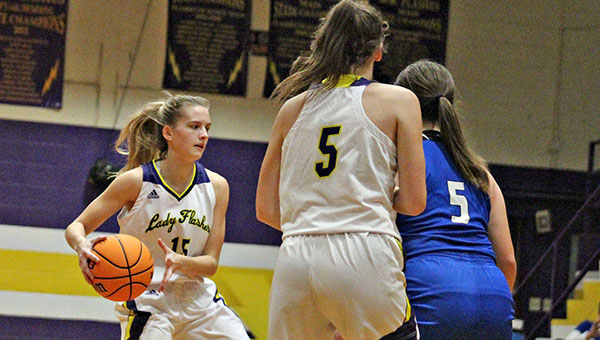 Throughout the second half of Friday, the St. Aloysius Lady Flashes reduced their deficit to double digits as if it were a huge chunk of ice.

Eventually, however, they cooled and their hopes for victory froze again.
Georgia Martin scored 14 points, McKenzie Campbell added eight and the Adams County Christian School weathered a cold snap to fend off the Lady Flashes 37-24.

The ACCS (3-12, 1-3 BUT District 3-5A) had just three baskets in the second half, but ended the game with six of their last eight points on the free throw line.

“Our defense was really good in the second half. They worked well as a team. It was that first half, ”said St. Al coach Savannah Buck.

This first half, and especially the second quarter, came when St. Al fell behind and had to catch up. Martin scored eight of his points in the second quarter as ACCS outscored the Lady Flashes 16-6 to take a 23-9 lead at halftime.

St. Al reacted well in the second half, however, and reduced the deficit. He came close to five points before going scoreless in the final four minutes of the game.

“Free throws. That was the big kick. But five fouled girls, what can you do?” Buck said.

ACCS also regained its composure in the home stretch to close the match. The Rebels went 7 for 12 from the free throw line in the fourth quarter – they had missed their seven free kicks in the third – and Tailor Magee had a big rebound basket late.

“We went to the locker room and we talked and said we had to fight. We shouldn’t be that low. It will be a completely different game in the second half, ”Buck said. “And they went out and did it. So I’m proud of them. I am not at all angry.

Boys
Warren Central 64, Pearl 47
The Warren Central boys’ basketball team built a double-digit lead in the first quarter, withstood a late charge from Pearl in the fourth and comfortably won their MHSAA Region opener 6-6A on Friday.

Gaylon Turner scored 25 points, the team’s top, while Taylor Mitchell had 15 points, eight assists and three steals.
Warren Central (6-11, 1-0 Region 6-6A) led 14-4 at the end of the first quarter, but Pearl caught up and came close to five late in the game before the Vikings broke. move away again.

The Vikings will have a week off before welcoming Terry on January 14th.

“It’s always important,” Warren Central coach Keith Williams said of the region’s opener win. “That’s what I insisted on. Now the real season begins. They are the ones who get us where we want to go.