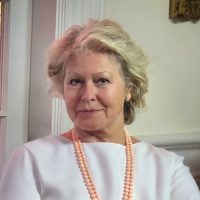 The Assael brand will continue to be a family business, with Senior Vice President Peggy Grosz taking charge of business operations.

Christina Lang was born in Sweden in 1946. After obtaining an International Baccalaureate in Modern Languages ​​in 1968, she traveled abroad and began a 13-year career as a model and commercial actress in London, Paris and New York.

She eventually landed at Sotheby’s, serving as a liaison with top clients, while earning a certificate in interior design from the New York School of Interior Design. She then started her own business acquiring works of art and antiques for connoisseurs and collectors.

It was at Sotheby’s that Christina met Salvador Assael, the legendary “Pearl King”. They married in 1991.

In 1993, Assael set a world record at Sotheby’s for the highest price ever paid for a row of pearls at auction: $ 2.3 million. This record stands to this day.

After Salvador passed away in 2011, Christina took over the reins of the Assael brand in 2011, leading the brand in new directions, ushering in new models of pearl jewelry and adding new categories such as coral.

Christina was a committed environmentalist who tried to ensure that no harm was done to the oceans where Assael jewelry is collected. She also served on the Coral Commission of CIBJO, the World Jewelry Federation.

She has supported the Sierra Club, the Duchess Land Conservancy and the Cary Institute of Ecosystem Studies. His company donated 10% of all pearl strand sales to the World Wildlife Federation Australia in early 2020 to help with the rescue and rehabilitation of bush animals.

She is survived by her children, Sophia and Robert, and her sister Pia.

In lieu of flowers, memorial gifts can be made in honor of Christina Lang Assael at the Ocean conservancy.