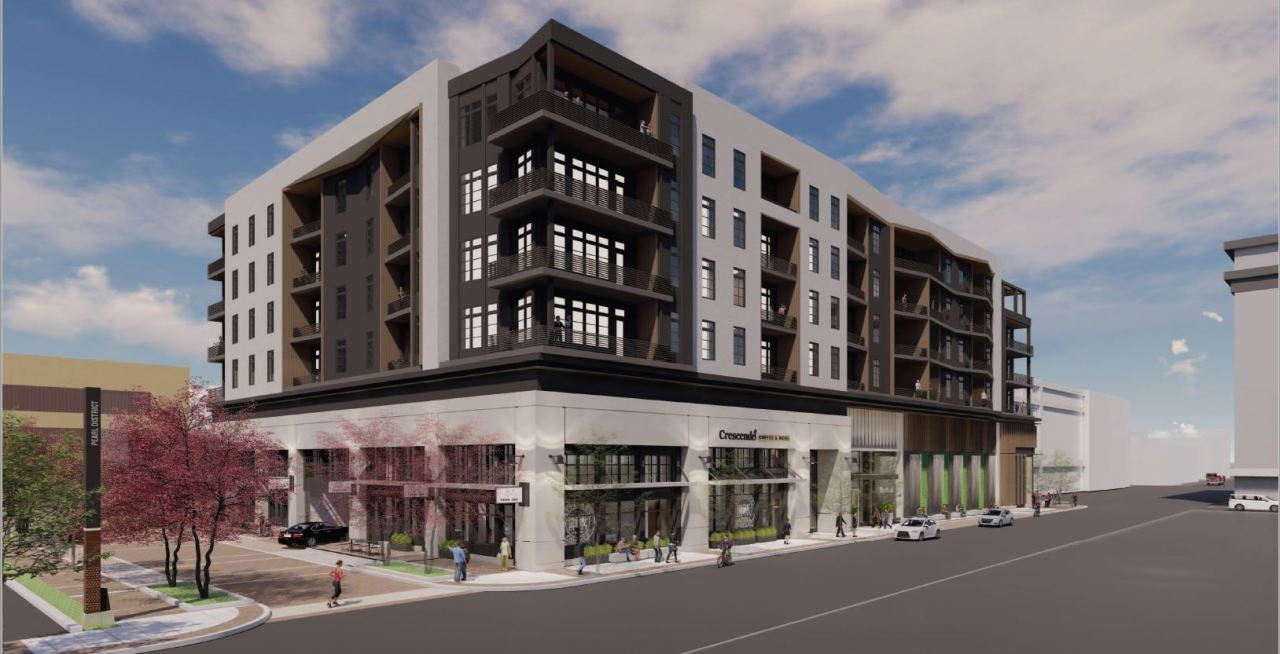 The commission has given final approval for The Pearl, a 7-story, $50 million mixed-use development underwritten by Chuck and Lisa Surack that will complement The Bradley, an upscale boutique hotel on Main and Harrison streets that opened its doors last year. The demolition of existing buildings on the site is already underway.

Residents can expect to see the building resembling Madrid architecture with commercial and event space on the ground floor, housing and parking, and “living/working units” in 18 to 24 month.

The Pearl lands at Riverfront I, as part of the downtown transformation along West Superior and Main streets, and is a TIF (tax increment financing) project. By approving this development, the city can begin collecting certain taxes and developing plans for infrastructure improvements such as streetscapes, replacing old water pipes and repairing streets, Leist said.

“It’s another exciting big project, a mixed-use project,” Leist said. “It builds on the momentum we had seen with the boutique hotel next door. Some of the features that will be in this building really grew out of the needs of this boutique hotel. ‘hadn’t will be incorporated into this building, some really exciting new workspaces that we haven’t really seen downtown yet, plus commercial spaces and apartments above, all wraparound parking lots that won’t be visible from the outside, so it looks like a coherent building.

But if other purchase agreements are approved, they will bring jobs and improvements to Fort Wayne.

The biggest news from the meeting was the $768,000 sale of 76.8 acres at the corner of Adams Center and Paulding Roads to exurban, an international metal recycling company that plans to invest $300 million in construction of a facility in southeast Fort Wayne. In about 18 to 24 months a year, Fort Wayne will see 200 more jobs coming to this area, paying between $50,000 and $70,000 a year.

“A lot of American scrap is shipped overseas and facilities like this will keep the product here to be reused,” owners Wes Anderson and Jean-Paul Deco said by phone. The facility will use nuclear power from AEP and there will be “zero waste,” Leist said. The facility will meet the need of “the huge market for copper and other metals”, they said. Belgian, German and British interests are involved in the company.

A local company, TJW Industrial, which builds custom HVAC and cold storage for food processing, has also been granted approval to purchase 7.64 acres of its headquarters. The purchase price for the parcel in the Summit II Industrial Park is $255,000, according to Leist and others at the commission meeting. The company was founded about three years ago by Joe Wagner, president, which employs 66 people.

The commission approved $77 million to expand Grand National Drive in the southwest part of the city to connect with Illinois Road and bypass Rewill Drive to spare neighbors the extra traffic. The project titled Illinois Crossing Roadway Extension Project will include a new traffic light and a new public street.

Finally, the commission also approved funding to move Comcast’s overhead facilities from above ground, where they hang “dangerously low,” to below ground with McKinnie and Plaza Drive. It’s a stretch of about 100 feet in a redevelopment area called Village Premier that offers affordable, market-priced housing, Leist said.