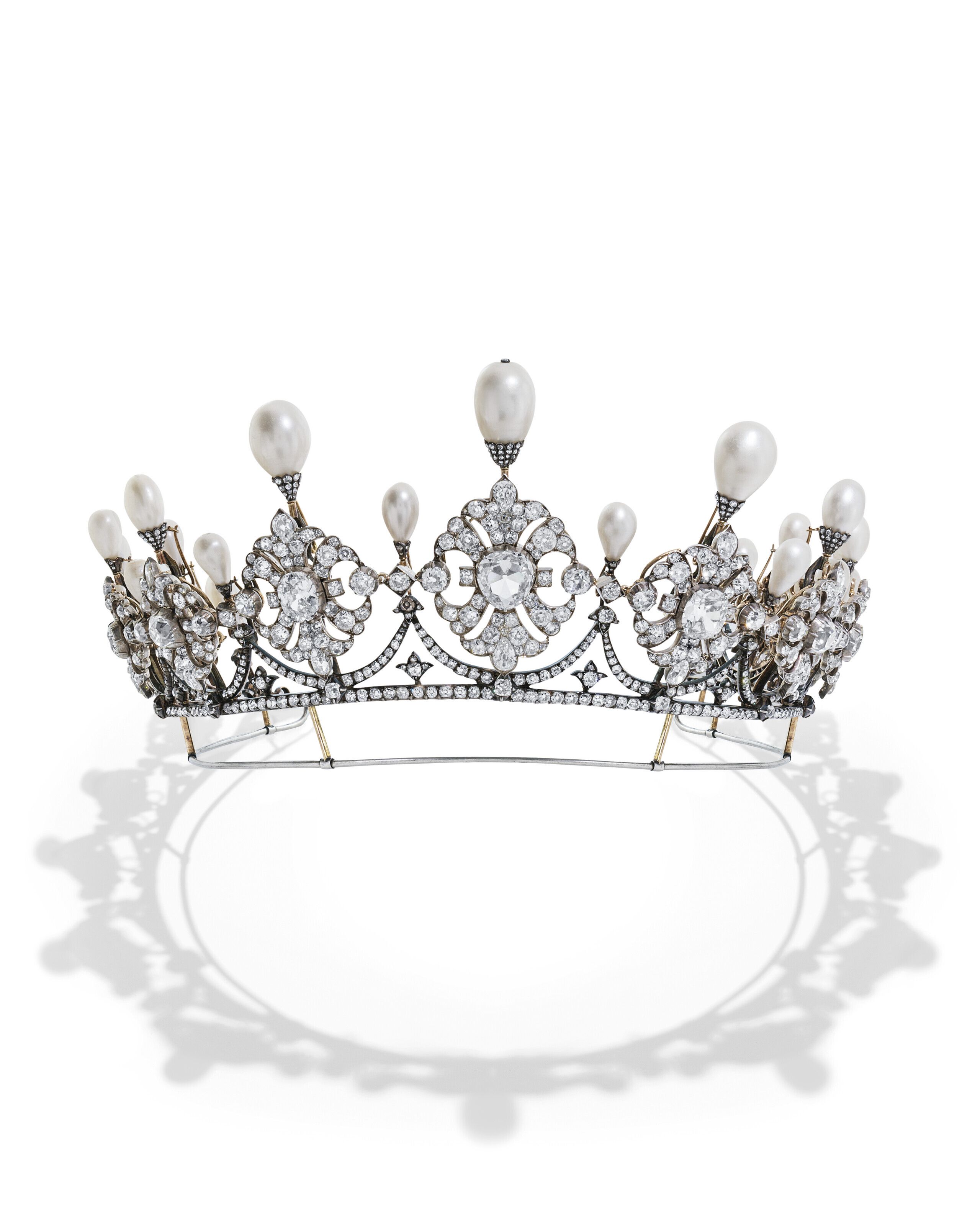 EXCEPTIONAL DIADEM IN NATURAL PEARLS AND DIAMONDS FROM THE 19TH CENTURY

The letter kept in the archives of Fürstenberg, managed by Flach Mediansky & Paltscho, famous Austrian jewelers of the end of the 19th century, explains the multiple ways of wearing the extraordinary tiara. The first and most obvious is to wear it full. Eleven double fleur-de-lis diamond designs, twenty-three pear-shaped pearls (three larger ones) are all set in an old-cut diamond setting. This is how the tiara was to be worn at court by its then owner: HSH the Princess of Fürstenberg, born Countess Irma of Schönborn Buchheim (1867-1948).
Although most of their lands were in Germany, in southern Baden-Württemberg, the princes of Fürstenberg were princes of the Holy Roman Empire and they had received their titles from the Habsburg emperors. They also owned land in Bohemia and a very impressive palace in Vienna. Therefore, they were an integral part of Viennese high society.

The Austrian season always began in January with the New Year’s reception and ended in May with the Corpus Christie procession, described by some as “God’s court ball”. Between these two dates, concerts, sumptuous dinners, private and official balls took place. The most important of these events were the balls given at the Hofburg Palace by the order of His Majesty Emperor Franz Joseph I. Divided into two categories: “court balls” and “court balls”. 2000 guests were invited to the Bals de la Cour. The list would include guests from the aristocracy, but also from the political and military world. The “Bals à la Cour” had only 800 guests, chosen exclusively from among the high aristocracy. The Fürstenberg princesses were on both lists and were also invited to opera premieres and private concerts. So the princesses needed a lot of tiaras, or at least a very transformable tiara.

In the letter, the jeweler mentions a second way to wear the tiara, simply by removing the diamond designs. In this way, the 23 pearls seemed to hang between the hair. A third way, even lighter, but still impressive, was to remove the small beads, leaving only the large ones. A fourth way was to wear only the diamond designs without pearls. There was of course a fifth way, not mentioned in the letter, of replacing the pearls with other precious stones. And that’s exactly what Princess Irma of Fürstenberg did when she had her portrait painted by Laszlo. She replaced the central pearl with an emerald drop. The diamond patterns could also be put together to be worn as a pretty impressive diamond necklace. And each diamond pattern could be worn as a brooch or a hairpin.

For centuries, the Fürstenberg family topped the list of the most important aristocratic families of the Habsburg Empire. Their earliest ancestors came from Swabia in southern Baden-Württemberg. There is not much left today of their original castle built at the end of the 12th century on the “Fürstenberg” which means “Prince’s Hill”. In 1250, this castle of Fürstenberg was inherited by Henry from the house of Urach who took the name of Fürstenberg. Until the early 18th century, the family’s wealth and lands were constantly distributed among many different branches of the family according to German tradition. In 1667, the Heiligenberg branch of the family received the title of prince from the Holy Roman Emperor. In 1716, the last male heir to the Heiligenberg branch of the Fürstenberg family died without heirs. His estates and titles were inherited by Joseph Wilhelm Ernst of Fürstenberg-Stühlingen (1699-1762) who became V Prince of Fürstenberg. Five years later, he undertook the construction of Donaueschingen Castle, one of the most beautiful palaces in Germany. It still belongs today to the Fürstenberg family. In 1744, following the death of the member of the Fürstenberg-Mösskirch line, Prince Joseph Wilhelm Ernst united all the titles and possessions of the Fürstenberg family.

At the end of the 18th century, the principality of Fürstenberg covered 2,000 km2 and its population was around 100,000. The wealth and status of this family were such that in 1770, when Archduchess Marie-Antoinette traveled to Versailles where she would marry the future Louis XVI of France, Donaueschingen was chosen as one of her stops. Prince Starhemberg, who commanded the Archduchess’ escort, was so amazed by the splendor of the Fürstenberg court that he wrote to Empress Maria Theresa on May 3, 1770:
“Around three o’clock in the afternoon, we arrive at the estate of the Prince of Fürstenberg in Donaueschingen. Everything here is laid out with magnificence as if the court were that of a sovereign. All the male courtesans wore a very rich uniform. And the ladies, including the princess, had white silk dresses embroidered with gold lace. The Prince had all the roads in his principality rebuilt for the Archduchess’s journey. It must have cost him more than 200,000 gold florins.”