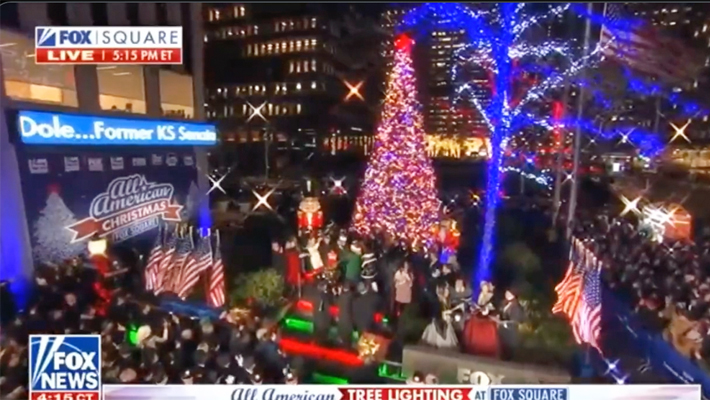 By now, you’ve probably heard too much about the Fox News Christmas tree fiasco. A suspect appeared to randomly burn “All-American Christmas Tree” at New York City headquarters in the early hours of Wednesday. The aftermath has included completely melting hosts all day while clamoring for a “War on Christmas” all the way. the fox and friends The gang grumbled about this obvious “increase in crime”, then the trio said it was “a hate crime on Fox News”. Tucker Carlson used the same term, and things get even more absurd with a ceremony for the new tree.

Suspected arsonist Craig Tomanaha (who was released) reportedly caused half a million dollars in damage, but the Conservative News Network already has a replacement for the 50ft fake tree. In Thursday’s edition of The five, a chorus of cheers went up during the live coverage of All-American Christmas Tree 2.0.

And on the mic, Fox News contributor Reverend Jacques DeGraff was so excited, to the point that he made an offbeat historical reference. “I’m here because these colors don’t run,” DeGraff proclaimed. “Eighty years ago this week, they tried to put out the darkness in a place called Pearl Harbor. We didn’t go to bed then, and we won’t now!”

During the lighting of the new Christmas tree, Fox News contributor Reverend Jacques DeGraff says, “I’m here because these colors don’t run. 80 years ago this week they tried to put out darkness in a place called Pearl Harbor. We didn’t lie down then, and we won’t now!” pic.twitter.com/J9Sp94Unto

This whole situation has been a theatrical mess with CNN’s Brianna Keilar calling out Fox News for being much more outraged by this fake tree than the Jan. 6 MAGA riot. Also, one on-air guest criticized the wall-to-wall coverage and will likely never be invited again. The Pearl Harbor track, though? This is next level stuff…

May 29, 1453: fall of Constantinople and death of the Roman Empire