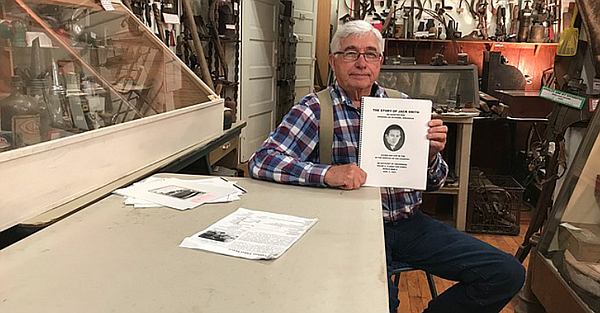 FOUKE — Around December 1, 1941, relatives of local resident Hubert Aaron sent him a Christmas package that came back marked “undeliverable” — and his family already knew why.

The package returned around December 20, just as Aaron’s family received a telegram from the Navy with the heartbreaking words: “I deeply regret to inform you that your son, Hubert Aaron, is missing following a action in the service of his country.

Aaron, 22, was among more than 2,400 servicemen killed in the December 7, 1941 Japanese attack on Pearl Harbor. He was aboard the battleship USS Arizona.

On Memorial Day 2021, the life and death of Aaron was the subject of a 121-page book written by Frank McFerrin, curator of the Miller County Historical and Family Museum.

“The Story of Hubert Aaron” is about “a young man, the families who produced him, the sacrifice he made and what it meant when he died on December 7, 1941 aboard the USS Arizona,” McFerrin wrote in the introduction to his book.

The book is the latest in a two-book series by McFerrin paying homage to the supposedly greatest generation of World War II. Previous work involved Fouke resident James “Jack” Smith, who served as a radio operator and gunner aboard a B-24 Liberator bomber in Europe.

Of the more than 16 million American men and women who entered the armed forces during the war, there are approximately 240,000 still alive.

Aaron began his military training in the ship’s engine room and eventually received the rank of firefighter second class. The mission involved training to inspect bearings, lubricate engines and operate fire engines, according to page 89 of McFerrin’s book.

“Most of these men who volunteered had never seen the ocean or even a Navy ship,” McFerrin wrote. “They were paid $21 a month, which was more than most of them could earn during the Great Depression.”

Aaron eventually received around $34 a month once he gained more proficiency as a second-class firefighter.

McFerrin, who began work on Aaron’s story in late summer 2020 before releasing on Memorial Day 2021, begins the story with Aaron’s birth on October 29, 1919, in Garland Township, also known as the Shiloh Community at the time.

Born to Alfred Alonzo and Jennie Aaron, Hubert Aaron grew up the youngest of six siblings living in the Ferguson and Sylverino communities northwest of Fouke.

After eight weeks of basic training in San Diego, Aaron requested and was granted an assignment to the 35,000-ton Arizona, which was docked in Bremerton, Washington, in early January 1941. The battleship, which cost $16 million dollars to build, was completed in June 1915. It could have held up to 1.5 million gallons of fuel oil and carried a crew of about 1,700 sailors.

On January 19, 1941, Arizona sailed along the California coast to San Pedro near Long Beach, not far from Los Angeles, before finally heading to Hawaii for fleet exercises. He sailed to Pearl Harbor on Feb. 3, according to McFerrin’s book.

After arriving at Pearl Harbor, Arizona remained stationed there for 11 months, participating in deep-sea training exercises. From there, she received assignments both in and out of Pearl Harbor.

In late 1941, the plan was to return the steamer from Arizona to Washington State about 10 days before Christmas so Aaron and other sailors would have a vacation.

However, those plans changed on December 7.

Shortly after the Japanese attack, it didn’t take long for naval officials to discover that Arizona was the most badly hit of the eight battleships in port. Of the more than 2,400 American deaths caused by the attack, almost half were on board the Arizona.

“It was a cool, crisp, clear Sunday” in the Texarkana area, where Aaron’s parents lived, when disturbing news came over the car radio around 1:25 p.m. that the Japanese had attacked Pearl Harbor, writes McFerrin . Aaron’s mother, Jennie, started yelling, “No! No! No!”

Alonzo Aaron tried to comfort his wife by saying their son might still be alive. A Dec. 20 Navy telegram listing Hubert as “missing in action” may have given his parents a glimmer of hope. Any optimism, however, faded in a January 23, 1942 letter from Secretary of the Navy Frank Knox.

“I wish to offer you my personal condolences on the tragic death of your son, Hubert Aaron…which occurred at the time of the Japanese attack on December 7th. I hope you will find comfort in the thought that he made the supreme sacrifice in the highest traditions of the Navy, in defense of his country.”

Through his research of Aaron’s family, McFerrin learned that they had been “faithful Christians, reading the Word and attending regular services.”

“Jennie Aaron called upon the ‘Rock of Ages’ – as a source of power that she knew was greater than herself. How else could she have faced such a terrible time in her life,” McFerrin wrote. towards the end of the book.

Copies of McFerrin’s book are available at the Miller County Historical and Family Museum.