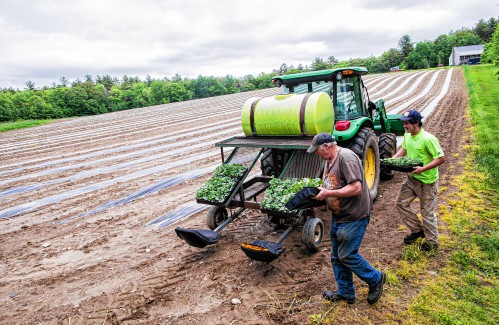 Pearl Farm in Loudon protects itself

The Trust for Public Land announced last week that the 275-acre farm was entirely covered by a conservation easement, a legal document that prevents development while allowing farming and forestry to continue. The easement will be owned by the Loudon Conservation Commission.

“It just takes a while to fundraise on this scale,” said JT Horn, project manager at the Trust for Public Land.

Funding for the $850,000 easement purchase came from the Natural Resources Conservation Service, a 2019 grant from the New Hampshire Land and Community Heritage Investment Program (LCHIP), the Loudon Conservation Fund and a discount sale by the landowner. Loudon’s funding was passed unanimously at their 2021 town meeting.

Members of the Pearl family have farmed on the Loudon Ridge Road site for four generations, dating back to the late 1800s.

The farm had a dairy operation which ended in the 1990s. In recent years, Pearl has expanded into vegetables and crops, such as hay, corn, squash and pumpkin, as well as long-term production of maple syrup, which is largely a wholesale operation that uses vacuum extraction, reverse osmosis and other modern technologies that increase production, but also increase operating costs and the need for skilled labor.

The money will allow the farm to pay off certain debts and make investments, as well as to plan for the long-term future.

“When Howard Pearl retires, it sets the stage for a transition to happen, whenever Howard is ready…and keep cultivating,” Horn said.

Loudon holds conservation easements on several farms in the town.