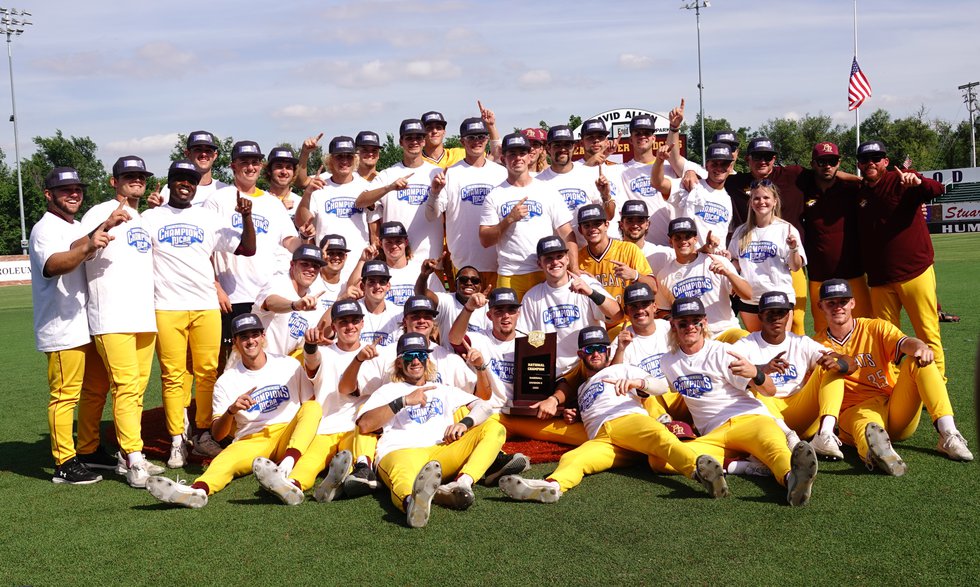 ENID, Okla. (WLOX) – A season to be remembered forever.

Dressed in all gold uniforms, Pearl River’s No. 1 baseball team won a 7-2 victory over No. 2 Madison to claim the program’s first national championship. With this victory, the Wildcats complete the “triple crown”, winning the MACCC Championship, Region 23 Championship and National Championship in the same season.

Although Pearl River (45-11 overall) was the first team to come to the plate, it was Madison (49-11) that entered the run column first. The Wolfpack hit a two-run homer late in the first inning to take the lead.

The Bats finally started in the sixth inning as the team’s offensive leader Tate Parker (Gulfport; West Harrison) stepped in and ran down the zone to crush a solo homer to cut the one-run deficit to 2-1. The circuit was his 19th of the season. That’s when the rally really began. Alex Perry (McComb; North Pike) hit the first pitch of his at-bat for a single and DK Donaldson (Gulfport; West Harrison) followed it up with their own single. Matt Mercier (Richton; Petal) was then hit by a pitch to load the bases for Ian Montz (Lafayette, Louisiana; Acadiana). The freshman right fielder fought off 10 pitches before stringing the 11th into right field for a two-run single, giving the PRCC a 3-2 lead in the process.

Two crucial insurance runs arrived for the Wildcats in the seventh quarter to extend the lead to 5-2. Gabe Broadus (Wilmer, Alabama; Faith Academy) chained a single between shortstop and third baseman to get things going. A walk from Parker followed by Perry reaching on a Wolfpack error loaded Donaldson’s bases. As if Donaldson hadn’t produced enough hits in the World Series, the first baseman clipped a hard single just out of shortstop Madison’s reach for two RBIs.

Montz opened the eighth inning with a single and advanced to second base on an error by pitcher Wolfpack. He then moved to third base after a wild pitch before a Madison dismissal sent him home to extend the 6-2 lead.

Perry added another big run in the ninth inning, blasting a 1-0 pitch off the wall to give Pearl River a 7-2 lead.

Turner Switchak (Hattiesburg; Oak Grove) had the ball in the ninth inning and retired the first two batters quickly. Finally, the third batter of the inning threw the fourth pitch of his at-bat into left field where Broadus was standing. The left fielder drifted to his right, grabbed the ball, and then pandemonium ensued as the Wildcat dugout stormed the field for a dogpile.