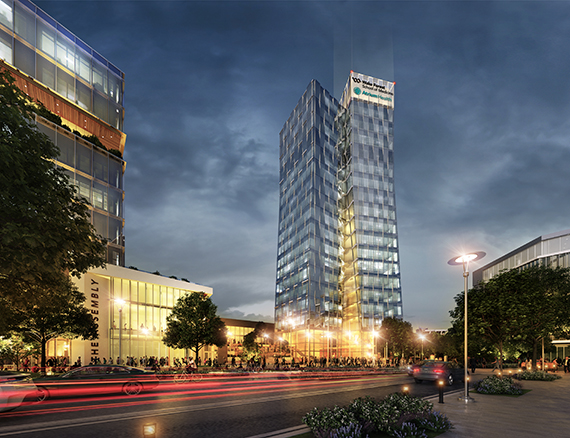 The Pearl district pays homage to the Brooklyn district, to innovation

To pay homage to Brooklyn’s historic neighborhood, Atrium Health plans to develop the Charlotte Innovative District known as The Pearl.

The groundbreaking will take place this year and will be located at the intersection of Baxter and McDowell streets in Midtown Charlotte.

The Pearl Innovation District will be built in Brooklyn’s former black community, a “city within a city” where thriving black-owned businesses, religious communities and families lived, worked and played. However, in the 1950s and 60s, gentrification took place in the area, displacing nearly 1,000 families, over 200 businesses, and 12 churches.

“Many might say that this part of town and its rich history has been largely overlooked,” said Gene Woods, president and CEO of Atrium Health. “But we are here now to start a new chapter in that story and honor this special place as we empower the neighborhoods around it, which are shaped by diverse people and perspectives, rooted in inclusivity and belonging. , and filled with infinite potential. I’m happy to share that Charlotte’s new innovation district, The Pearl, will be a place where Charlotte’s historic vitality meets its innovative future. It is a place where excellence lives and where excellence is learned.

One piece of Brooklyn that remains is Pearl Street Park, the city’s first African-American park and a popular hangout to this day.

Brooklyn was near Good Samaritan Hospital in Third Ward, a rooted African-American hospital that was connected to Atrium Health’s flagship Carolinas medical center. The Good Samaritan was made up of black doctors, nurses, and health workers who treated and cared for African Americans during a time of rigid segregation in the South.

“I once lived in the neighborhood called Brooklyn and spent a lot of time in the famous Pearl Street Park,” Reverend Janet Garner-Mullins said. “One of the things I remember is that Brooklyn was an entity unto itself. Everything we needed was in our community except for the hospital. I’m hopeful and I am optimistic that the future of the Innovation District would benefit our community, especially the black and brown community.

The Innovation District will be a public-private partnership with the City of Charlotte and Mecklenburg County committing $75 million in infrastructure for Phase I of the development.
The Pearl will house Wake Forest University School of Medicine Charlotte and will focus on innovation and expansion of the technology and healthcare industries. There will be development for education, retail, minority businesses, apartments, a hotel and open community space.

“I am extremely excited about the future of The Pearl and the planning in place to recognize and honor the rich history of the surrounding neighborhood,” said Mayor Vi Lyles. “As a strong public-private partnership, The Pearl will be a new crown for the Queen City, bringing new jobs, investment and opportunity.”

Over the next 15 years, the district is expected to create more than 11,500 jobs, including 5,500 on-site jobs, with 40% of positions not requiring a college degree.

The hub is a partnership with Atrium Health, Wexford Science and Technology, local government and the community, including Johnson C. Smith University and people who once lived in Brooklyn.

The objective of the innovation districts is to serve as a place for entrepreneurship, creativity and innovation. While The Pearl will focus on research, the ultimate goal is to create a sense of “liveability and community” in the Queen City.

“It takes a long time to create a pearl in its natural environment,” Woods said. “And, just like a pearl, our journey to build an innovation district will undoubtedly take time, energy and determination. However, with the support and strength of our friends and partners in the City of Charlotte, Mecklenburg County and the State of North Carolina, together we will create the crown jewel of the Queen City.

Aaliyah Bowden, who covers health for The Post, is a member of the Report For America corps.